Irvine is a planned city, mainly developed by the Irvine Company since the 1960s. Formally incorporated on December 28, 1971, the 66-square-mile city had a population of 212,375 as of the 2010 census; in 2015 the city's population was 250,384 The city's mission statement is "to create and maintain a community where people can live, work, and play in an environment that is safe, vibrant, and aesthetically pleasing".

Irvine is a planned city, mainly developed by the Irvine Company since the 1960s. Formally incorporated on December 28, 1971, the 66-square-mile city had a population of 212,375 as of the 2010 census; in 2015 the city's population was 250,384 The city's mission statement is "to create and maintain a community where people can live, work, and play in an environment that is safe, vibrant, and aesthetically pleasing".

Because Irvine is home to highly-rated public schools, a large number of jobs requiring a skilled workforce, and residential housing, Irvine was chosen in 2008 by CNNMoney.com as the fourth best place to live in the United States. In 2012, it was ranked sixth nationally. In September 2011, Businessweek listed Irvine as the fifth best city in the United States.Irvine consistently ranks as the safest city in America with a population over 100,000. In 2014, Irvine was named the best-run city in the U.S. by 24/7 Wall Street. A number of corporations have their national or international headquarters in Irvine, particularly in the technology and semiconductor sectors.

Irvine borders Tustin to the north, Santa Ana to the northwest, Lake Forest to the east, Laguna Hills onto the southeast, Costa Mesa to the west, and Newport Beach to the southwest. San Diego Creek, which flows northeast into Upper Newport Bay, is the primary watercourse draining the city. Its largest tributary is Peters Canyon Wash. Most of Irvine is in a broad, flat valley between Loma Ridge in the north and San Joaquin Hills in the south. In the extreme northern and southern areas, however, are several hills, plateaus and canyons. 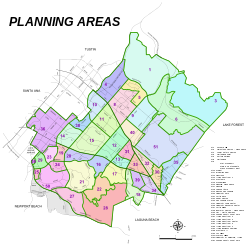 The planning areas of Irvine

All streets have landscaping allowances. Rights-of-way for powerlines also serve as bicycle corridors, parks and greenbelts to tie together ecological preserves. The greenery is irrigated with reclaimed water. The homeowners' associations which govern some village neighborhoods exercise varying degrees of control on the appearances of homes. In more restrictive areas, houses' roofing, paint colors, and landscaping are regulated. Older parts of the Village of Northwood that were developed beginning in the early 1970s independently of the Irvine Company, have the distinction of being a larger village that is not under the purview of a homeowners' association. As a result, homeowners in the older Northwood areas do not pay a monthly village association fee; its neighborhoods are generally not as uniform in appearance as those in other villages, such as Westpark and Woodbridge. However, the more tightly regulated villages generally offer more amenities, such as members-only swimming pools, tennis courts, and parks.

Irvine, like most of coastal Southern California, generally has a Mediterranean climate . Summers are warm-to-hot, and winters are cool-to-warm, rarely falling below freezing. Precipitation in Irvine occurs predominantly during the winter months. Although snow is nonexistent, frost occasionally occurs.

Find a Home in Irvine

See All Neighborhoods
Based on information from California Regional Multiple Listing Service, Inc. as of May 21, 2022 9:43:pm. This information is for your personal, non-commercial use and may not be used for any purpose other than to identify prospective properties you may be interested in purchasing. Display of MLS data is usually deemed reliable but is NOT guaranteed accurate by the MLS. Buyers are responsible for verifying the accuracy of all information and should investigate the data themselves or retain appropriate professionals. Information from sources other than the Listing Agent may have been included in the MLS data. Unless otherwise specified in writing, Broker/Agent has not and will not verify any information obtained from other sources. The Broker/Agent providing the information contained herein may or may not have been the Listing and/or Selling Agent.